20 + Questions to ask your celebrant

The ‘Boyfriend explains what makeup is’ Tag.

Woo! This is one of the things I’ve been most looking forward to! Sentosa Island!

We did the usual breakfast ordeal then back to our rooms to get ready. We usually meet down stairs at 9ish.

We organised our tickets for the day. We were getting a cable car to the island, going to ‘Madame Toussauds’ and then the aquarium. We didn’t like the ticket guy he was too salesy so if we wanted to buy more tickets we’d do so on the island.

We caught a taxi to the top of a mountain thing to get the cable car to the island. It was great. I loved it. Mum had a little issue with the heights and so did Kris, I felt a little queasy when we were over the water. But after two seconds, I was fine. 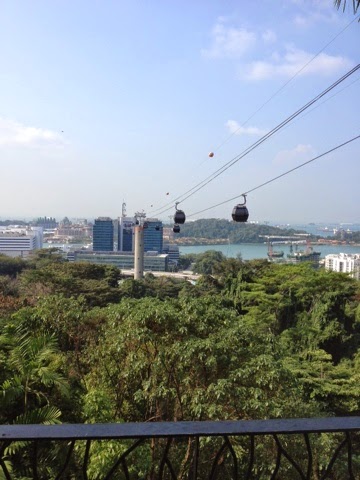 Madame Toussauds was basically in front of the cable car station so we went there first. It’s only a new attraction (to my knowledge) on the island and wasn’t very busy. We went through a section about the history of Singapore which I found really cool it was kind of a skit with actors and stuff. They called upon people in the audience and of course I got targeted first. It was fine. We had fun. Actually, the only people to be called upon were people in our group. We then went on to the wax figurines and posed with some celebs. I am not at all ashamed of the fact I groped Leonardo Di Caprio. There weren’t as many figurines in this one as the one in London but it was still cool. Most of the photos are on my camera so I’ll upload them later.

The aquarium was next. We walked down to ‘Merlion’ plaza. The Merlion is the symbol of Singapore. It’s pretty cool. 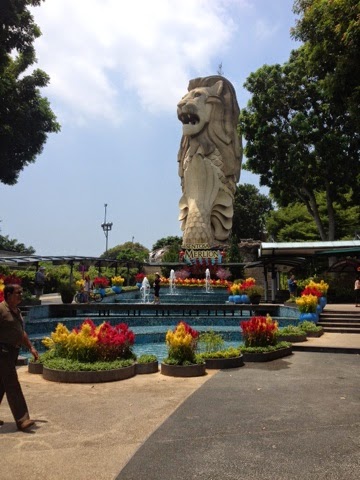 Head if a lion tail of a fish = MERLION! He’s my fave.

Now in to the aquarium! 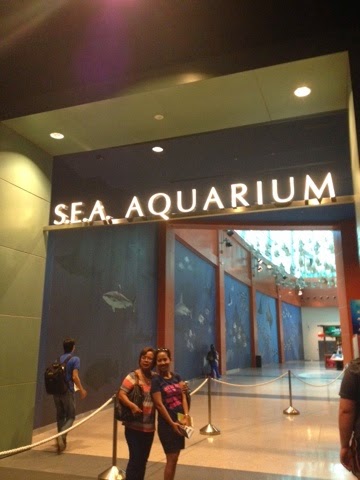 I may have taken this photo at the same time others were posing for theirs.

The aquarium was amazing. This is my favourite one I’ve been to. Then Melbourne and Barcelona. The lighting was Amazing so you cod actually see the sea creatures and everything was so clean. We were in one of the tunnels where you can see the sharks etc swim over you, and a man was posin for a photo I kept trying to dodge it but he kept coming over to the area I was for a better opportunity so he asked if I wanted to be in a photo. So I said sure. Haha. I posed with him and then a little while later he asked Kris and I to be in a photo with his friend. We did. Thank you elderly Chinese men for making this experience super duper fun! We were walking through and we were pretty amazed by what we’d seen so far. But then we came to an entire wall of aquarium. Kris and walked up to it and just sat there for 15-20 minutes watching the sea life. I could have stayed all day and not got bored. 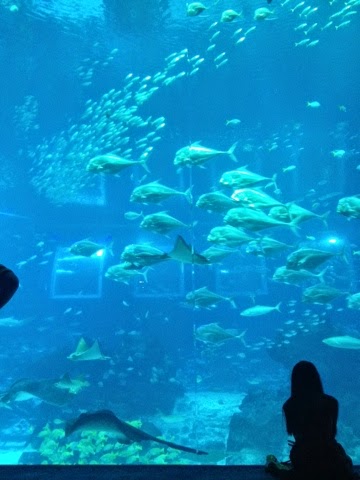 It was absolutely massive and so beautiful. There was a big blue groper fish whose eyeball was the size of a Ping Pong ball who kept looking directly at me. I felt like he was looking into my soul. After another 5 minutes staring at this beautiful place we started to wander off and look at some more pretty things. One of my favourite creatures to look at are the jelly fish. They’re so peaceful to watch and usually glow or have some defining feature that makes them pretty. 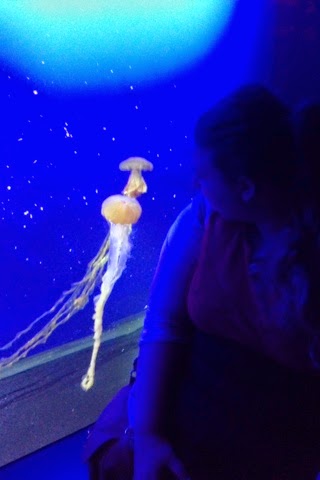 I love this photo so much. It doesn’t even look like there is glass separating us. 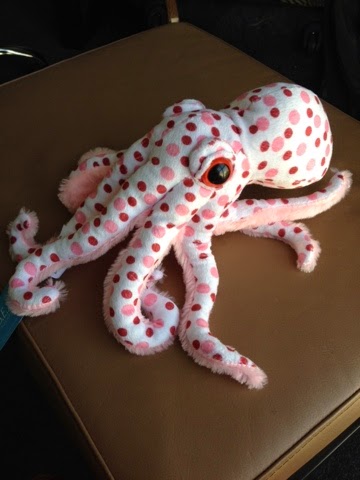 Why Jenny? Well do you remember that JLo song? Jenny from the block? Well… We were singing that in the taxi for some reason and when we got home I was singing it about the octopus but with some slightly modified words (those who hate puns look away now) “don’t be fooled by the rock-pool I got, I’m still (I’m still) Jenny with the spots.”

So yeah. That’s how she got her name.

After the aquarium it was time for food. We hadn’t eaten since breakfast and it was now time for a late lunch. On the way to the aquarium Kris saw a place where you make your own pancakes and this was intriguing so we decided we’d go there. We were sitting on a bench after exiting the aquarium just relaxing in the humidity, when a bunch of women say down next to us. I shimmied over to give them more room. They were all taking photos and I jokingly slid over and smiled next to an elderly woman they all laughed so I slid back over to let them take their photos, but they asked me to come back. It was the elderly Chinese men all over again, but this time in a group photo, a single of me and the original woman and then one lady on either side of me. It was all in good fun and we were all laughing. She showed me the photo at the end to get my approval. I wish I had taken a photo with them on my camera. ):

Lunch time! Time for the pancake place. It was called ‘slappy cakes’ I kept reading it as sloppy cakes. Haha. It was so cool! 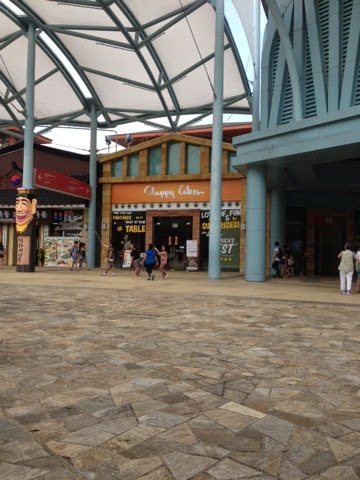 This is almost like the places where they cook the food at your table. Instead you do it yourself! There is a menu you order what kind of batter and toppings you want and then cook them on the hot plate that is built into the table! It was so cook! I had buttermilk batter and strawberries and whipped cream, Kris had whole grain batter (he wanted zucchini but there were sold out) and mushrooms and bacon bits. Making the pancakes was so much fun! 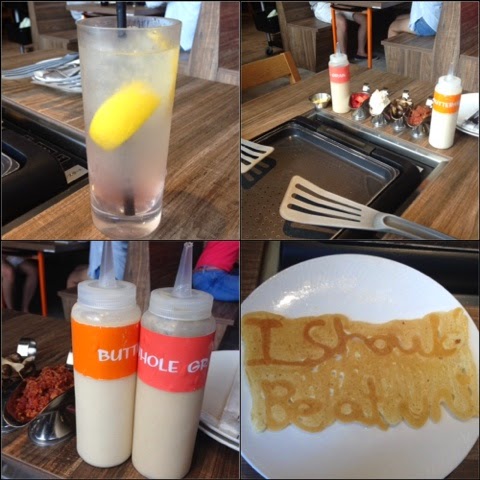 Top left: my drink, lavender lemonade. It was delicious. Lavender infused syrup mixed into lemonade. Was very sweet at first bit once mixed in. It was perfect! I want to try and make it when I get home.

Too right: the table set up! Hot plate, batters and toppings!

Bottom left: Maturity levels through the roof. Both our batter bottles together to make the word butthole. Yep.

Bottom right: one of the pancakes I made “I should be at uni” we made some other ones too I’ll have to add them later.

I totally think the pancake kitchen should have something like this. It’ll make it so much cooler!

The last place for the day was the butterfly and insect house. It was so beautiful. We just walked through and there were butterflies everywhere. The ‘guide’ just picked them up and put them on our hands. It was so lovely. 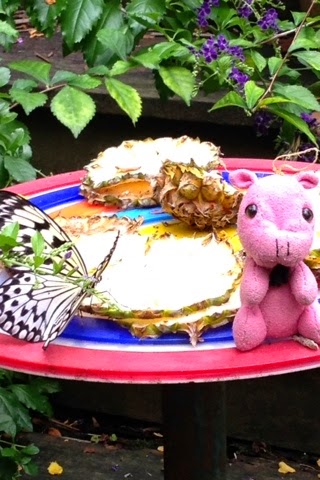 The butterflies are huge! Some as big as my palm others bigger!

The insect part of this was actually pretty cool. They had an ‘Australian’ section. Which there were like all the beetles. I’m like… Yay?

We trundled our way through the rest of that and then went to the cable cars to go back to the hotel. We caught a taxi back (it look a little while to get one but we managed).

Back at the hotel we caught up with everyone and just chilled out for the night. Kris and I ordered room service for dinner. Because we didn’t feel like going out again. We had burgers. But the buns were black. Not burnt but, just how they’re made. With bamboo charcoal. Wicked huh. 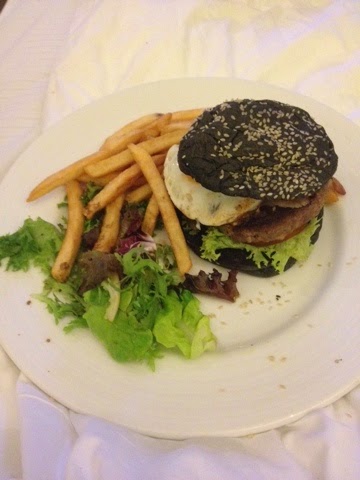 We just hung out in the room and went to bed. We had a busy day. But tomorrow we leve Singapore to get on our cruise! Yay I can’t wait. Internet might be a birch patchy so I’ll update when I can!